Earth is losing 39 cubic miles of ice per year !!

Oh lord, is the planet ever melting. And thanks to the GRACE satellite, we now know that the planet is shedding 150 billion tons of ice annually, like some gigantic glass of lemonade left out in the sun.

Melted down, just seven years of that lost ice would cover the entire United States in a foot and a half of water.

The good news is that the pair of satellites used to measure The Great Melt is totally badass and you should take a moment to geek out on its awesomeness:

Launched in 2002, two GRACE satellites whip around Earth in tandem 16 times a day at an altitude of about 300 miles, sensing subtle variations in Earth’s mass and gravitational pull. Separated by roughly 135 miles, the satellites measure changes in Earth’s gravity field caused by regional changes in the planet’s mass, including ice sheets, oceans and water stored in the soil and in underground aquifers.

Variations in the gravitational tug of the Earth — say, from more or less ice on the surface of Greenland — push the satellites apart or pull them together, and they can measure these changes in distance to degrees as small as 1/1000th the width of a human hair. And that is how they know that we are completely fucked.

Christopher Mims’s dystopian non-fiction is sought after by an ever-growing roster of publications.

"This is the first time anyone has looked at all of the mass loss from all of Earth's glaciers and ice caps with GRACE," said Wahr. "The Earth is losing an incredible amount of ice to the oceans annually, and these new results will help us answer important questions in terms of both sea rise and how the planet's cold regions are responding to global change." 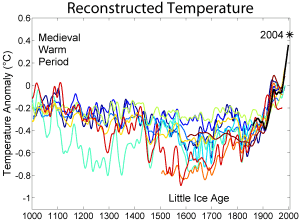 — Earth's glaciers and ice caps outside of the regions of Greenland and Antarctica are shedding roughly 150 billion tons of ice annually, according to a new study led by the University of Colorado Boulder.
See Also:
Earth & Climate
Reference

The research effort is the first comprehensive satellite study of the contribution of the world's melting glaciers and ice caps to global sea level rise and indicates they are adding roughly 0.4 millimeters annually, said CU-Boulder physics Professor John Wahr, who helped lead the study. The measurements are important because the melting of the world's glaciers and ice caps, along with Greenland and Antarctica, pose the greatest threat to sea level increases in the future, Wahr said.

The researchers used satellite measurements taken with the Gravity Recovery and Climate Experiment, or GRACE, a joint effort of NASA and Germany, to calculate that the world's glaciers and ice caps had lost about 148 billion tons, or about 39 cubic miles of ice annually from 2003 to 2010. The total does not count the mass from individual glacier and ice caps on the fringes of the Greenland and Antarctic ice sheets -- roughly an additional 80 billion tons.

"This is the first time anyone has looked at all of the mass loss from all of Earth's glaciers and ice caps with GRACE," said Wahr. "The Earth is losing an incredible amount of ice to the oceans annually, and these new results will help us answer important questions in terms of both sea rise and how the planet's cold regions are responding to global change."

A paper on the subject is being published in the Feb. 9 online edition of the journal Nature. The first author, Thomas Jacob, did his research at CU-Boulder and is now at the Bureau de Recherches Géologiques et Minières, in Orléans, France. Other paper co-authors include Professor Tad Pfeffer of CU-Boulder's Institute of Arctic and Alpine Research and Sean Swenson, a former CU-Boulder physics doctoral student who is now a researcher at the National Center for Atmospheric Research in Boulder.

"The strength of GRACE is that it sees everything in the system," said Wahr. "Even though we don't have the resolution to look at individual glaciers, GRACE has proven to be an exceptional tool." Traditional estimates of Earth's ice caps and glaciers have been made using ground-based measurements from relatively few glaciers to infer what all of the unmonitored glaciers around the world were doing, he said. Only a few hundred of the roughly 200,000 glaciers worldwide have been monitored for a decade or more.

Launched in 2002, two GRACE satellites whip around Earth in tandem 16 times a day at an altitude of about 300 miles, sensing subtle variations in Earth's mass and gravitational pull. Separated by roughly 135 miles, the satellites measure changes in Earth's gravity field caused by regional changes in the planet's mass, including ice sheets, oceans and water stored in the soil and in underground aquifers.

A positive change in gravity during a satellite approach over Greenland, for example, tugs the lead GRACE satellite away from the trailing satellite, speeding it up and increasing the distance between the two. As the satellites straddle Greenland, the front satellite slows down and the trailing satellite speeds up. A sensitive ranging system allows researchers to measure the distance of the two satellites down to as small as 1 micron -- about 1/100 the width of a human hair -- and to calculate ice and water amounts from particular regions of interest around the globe using their gravity fields.

For the global glaciers and ice cap measurements, the study authors created separate "mascons," large, ice-covered regions of Earth of various ovate-type shapes. Jacob and Wahr blanketed 20 regions of Earth with 175 mascons and calculated the estimated mass balance for each mascon.

The CU-led team also used GRACE data to calculate that the ice loss from both Greenland and Antarctica, including their peripheral ice caps and glaciers, was roughly 385 billion tons of ice annually. The total mass ice loss from Greenland, Antarctica and all Earth's glaciers and ice caps from 2003 to 2010 was about 1,000 cubic miles, about eight times the water volume of Lake Erie, said Wahr.

"The total amount of ice lost to Earth's oceans from 2003 to 2010 would cover the entire United States in about 1 and one-half feet of water," said Wahr, also a fellow at the CU-headquartered Cooperative Institute for Research in Environmental Sciences.

The vast majority of climate scientists agree that human activities like pumping huge amounts of greenhouse gases in the atmosphere is warming the planet, an effect that is most pronounced in the polar regions.

"The GRACE results in this region really were a surprise," said Wahr. "One possible explanation is that previous estimates were based on measurements taken primarily from some of the lower, more accessible glaciers in Asia and were extrapolated to infer the behavior of higher glaciers. But unlike the lower glaciers, many of the high glaciers would still be too cold to lose mass even in the presence of atmospheric warming."

"What is still not clear is how these rates of melt may increase and how rapidly glaciers may shrink in the coming decades," said Pfeffer, also a professor in CU-Boulder's civil, environmental and architectural engineering department. "That makes it hard to project into the future."

According to the GRACE data, total sea level rise from all land-based ice on Earth including Greenland and Antarctica was roughly 1.5 millimeters per year annually or about 12 millimeters, or one-half inch, from 2003 to 2010, said Wahr. The sea rise amount does include the expansion of water due to warming, which is the second key sea-rise component and is roughly equal to melt totals, he said.

"One big question is how sea level rise is going to change in this century," said Pfeffer. "If we could understand the physics more completely and perfect numerical models to simulate all of the processes controlling sea level -- especially glacier and ice sheet changes -- we would have a much better means to make predictions. But we are not quite there yet."

Posted by Indigenous Peoples Literature at 5:42 AM