http://www.guardian.co.uk/world/2013/mar/02/amazon-rainforest-tribe-yanomami-...Napoleon Chagnon provoked uproar with his account of life in an Amazon community. His latest work has reopened the debate. 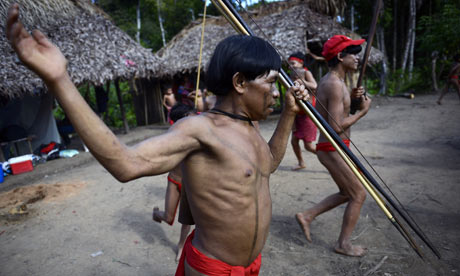 Yanomamö natives performing a ritual dance: their defenders say they are being depicted as savages so thet developers can take their land. Photograph: Leo Ramirez/Getty

It became one of the fiercest scientific arguments in recent times: are the Yanomami Indians of the Amazon rainforest a symbol of how to live in peace and harmony with nature or remnants of humanity's brutal early history?

Now a debate that has divided anthropologists, journalists, human rights campaigners and even governments has been given a fresh burst of life by the publication of a lengthy memoir by outspoken US anthropologist Napoleon Chagnon.

Chagnon has spent decades studying and living with the Yanomami (also known as the Yanomamö) and wrote the best-selling – and hugely controversial – Yanomamö: The Fierce People. In that book, which came out in 1968, he portrayed the 20,000-strong tribe, who live in isolated jungle homelands in Venezuela and Brazil, as a warlike group whose members fought and battled each other in near-constant duels and raids. He described Yanomami communities as prone to violence, with warriors who killed rivals far more likely to win wives and produce children.

His analysis was criticised as a reductive presentation of human behaviour, seen as primarily driven by a desire to mate and eliminate rivals. Opponents of that view believed the Yanomami were still pursuing a lifestyle dating from mankind's early past, when people lived mostly peacefully in smaller communities, free from modern sources of stress and far more in equilibrium with their surroundings.

Chagnon's new 500-page book, Noble Savages, is set to reignite the argument. In it he launches an impassioned defence both of his work and life among the Yanomami and an equally spirited attack on his critics and fellow scientists. The book's subtitle perhaps sums up his attitude to both groups: "My life among two dangerous tribes – the Yanomamö and the anthropologists."

Chagnon describes life in the rainforest spent constructing villages, hunting for food, and, as shamans take powerful hallucinogens, bloody raids on rival groups. "The most inexplicable thing to me in all of this was that they were fighting over women... I anticipated scepticism when I reported this after I returned to my university," he wrote. He was not wrong. His research created a huge storm and accusations that it allowed Amazonian tribes to be depicted by governments and outside interests as bloodthirsty savages who deserved to lose their land to the developers.

Chagnon defends himself from that charge, using much of the book to attack fellow scientists' conclusions and saying that too many anthropologists are ignoring the pursuit of pure research in favour of becoming activists for the civil rights of their subjects.

"In the past 20 or so years the field of cultural anthropology in the United States has come precipitously close to abandoning the very notion of science," he writes.

But Noble Savages has prompted a fresh wave of attacks on Chagnon. Last week a group of prominent anthropologists who have worked with the Yanomami issued a joint statement.

"We absolutely disagree with Napoleon Chagnon's public characterisation of the Yanomamö as a fierce, violent and archaic people," they said. "We also deplore how Chagnon's work has been used throughout the years – and could still be used – by governments to deny the Yanomamö their land and cultural rights."

One of the signatories, Professor Gale Goodwin Gomez of Rhode Island College, who has also spent several decades studying the tribe, told the Observer she was dismayed that Chagnon had published a new book. "This is just another attempt to grab attention. I have lived in Yanomamö villages and have never needed a weapon," she said.

The group also published a statement from Davi Kopenawa, spokesman for a Yanomami group in Brazil, that was critical of Chagnon's core conclusions. "For us, we Yanomamö who live in the forest, the anthropologist Napoleon Chagnon is not our friend. He does not say good things, he doesn't transmit good words. He talks about the Yanomamö but his words are only hostile," he said.

But Chagnon, who declined to be interviewed by the Observer, has stood by his lifetime of work and study. In an emailed conversation with the Inside Higher Ed website, he repeated his beliefs that anthropology had abandoned science in favour of political activism but said that the situation would one day reverse itself.

"Those departments of anthropology whose members adhere to the scientific method will endure and again come to be the 'standard approach' to the study of Homo sapiens, while those that are non-scientific will become less and less numerous or eventually be absorbed into disciplines that are non-anthropological, like comparative literature, gender studies, philosophy and others," he wrote.

Posted by Indigenous Peoples Literature at 4:40 AM