The Navajo Nation is speaking out over a joke that aired on CBS’ “Mike & Molly” referring to Native Americans as “drunk Indians.”

In the episode that aired last week, Mike’s mother Peggy, who is played by Rondi Reed, quipped, “Arizona? Why would I move to Arizona? It’s nothing but a furnace full of drunk Indians.”

Erny Zah, a spokesperson for the Navajo Nation, which occupies parts of Arizona, told ABCNews.com, “It’s offensive, it’s derogatory, it’s deplorable. Ignorance is one thing, but this must have passed through a lot of eyes before it appeared on a network show.”

Zah added, “An apology would be appropriate but it can’t fix the damage done.”

Both CBS and Warner Bros., which produces “Mike & Molly,” declined to comment for this story.

Zah said neither the network nor producers have been in touch with the Navajo Nation.

“Alcoholism is a real issue on our reservations and it’s not funny,” Zah said. 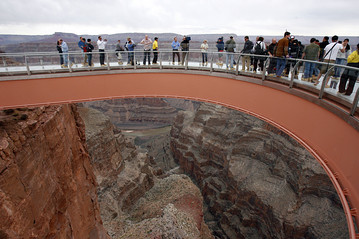 The Grand Canyon Skywalk, a glass-bottomed walkway that juts out over the canyon’s edge for a view of the Colorado River 4,000 feet below, is built on stable ground. The finances of the Indian tribe-owned corporation that had it built in 2007, however, are a bit shakier.

The Hualapai (pronounced wall-a-pie) Tribe put the corporation that owns the skywalk into bankruptcy protection on Monday after losing a court battle against Las Vegas developer David Jin, who was hired to build and manage the Arizona tourist attraction in 2003.

Last month, a federal judge in Arizona confirmed a $28 million arbitration award against the tribe’s corporation. The ruling awards Jin’s company millions of dollars in ticket revenue that his attorneys argued were due under the agreement, USA Today reported last month. The tribal corporation, called Sa’ Nyu Wa Inc., is appealing the ruling, according to court papers.

When Jin tried to seize the skywalk owner’s bank accounts, the entity filed for Chapter 11 bankruptcy protection.  That filing halts collection efforts and lobs the dispute to Judge Brenda Moody Whinery of the U.S. Bankruptcy Court in Yuma, Ariz.

In a letter sent to tribe members about the bankruptcy, tribal Chairwoman Sherry Counts said that Jin doesn’t have access to the tribe’s budget. The tribe itself isn’t in bankruptcy, she emphasized.

The tribal corporation hired Jin’s company to design and build the Skywalk and then manage it for 30 years. The deal streamed ticket revenue to Jin for constructing the roughly $30 million project.

But last year, council members voted to condemn that management contract and take over the operations, arguing that Jin’s company didn’t build a visitors center as the contract had required.

Bankruptcy court papers filed Monday show that the tribe had recently transferred the Skywalk’s management to another tribal entity. The company under Chapter 11 protection does “not have the ability or intention to continue its business operations,” its chief executive, Jennifer Turner, said in court papers.

Most of the Hualapai tribe’s roughly 2,300 members live on the Arizona reservation, which covers one million acres of land that trace 108 miles of the Grand Canyon. The reservation’s capitol, Peach Springs, was the inspiration for the town of Radiator Springs in Pixar’s animated movie “Cars,” according to the tribe’s website.

The reservation’s economy depends upon cattle ranching, craft-making and tourism, which grew after the tribe opened its doors to visitors in 1988. The Skywalk and surrounding region attract about 370,000 visitors each year, said tribe spokesman Dave Cieslak.

Write to Katy Stech at katy.stech@dowjones.com

Posted by Indigenous Peoples Literature at 4:36 AM