On March 7, 2012, The state-sponsored China News Agency published an article entitled: "Sichuan Representatives Respond on the Aba Monks Self-Immolations: Absolutely Are Not Representative of Mainstream Tibetan Areas" (四川代表回应阿坝僧人自焚：丝毫不能代表藏区主流). The article cited Liu Qibao (刘奇葆 - Sichuan Communist Party Secretary) as saying: "Just now the AP reporter mentioned that some people in Tibetan areas complain about the suppression of minority culture. This problem does not exist in day-to-day life in Tibetan areas." (刚才美联社记者提到藏区有人抱怨压制少数民族文化。这个问题在藏区的现实生活中是不存在的。)These screenshots show that, at some point in late February or early March, Sina Weibo began censoring searches for "Aba Self-Immolate" (阿坝 自焚). 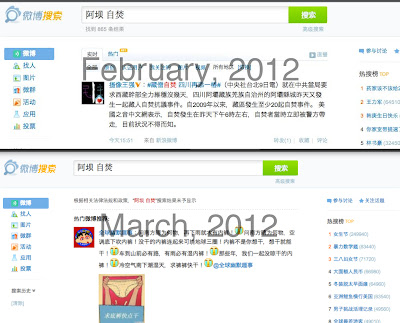 Eventually, Sina stopped blanket censorship for searches for those terms. But at around noon on May 28, 2012, Xinhua reported that on the previous day two Tibetan men had set themselves on fire on a well-known market street in downtown Lhasa. These screenshots show that as of 5 pm on May 28, a search on Sina Weibo for "self-immolation" (自焚) returned millions of results. The same search done several hours later only returned a notice saying "In accordance with relevant laws, regulations, and policies, search results for 'self-immolation' have not been displayed." (根据相关法律法规和政策，“自焚”搜索结果未予显示).

Once again, after some time Sina stopped blanket censorship for this term.  These screenshots were taken on August 6, 2012. The left-hand screenshot shows Sina Weibo returns two search results for "Aba Self-Immolate" (阿坝 自焚): One from August 6 and one from July 14.

July 14: Aba Kirti monastery, its said this is the home of Dana, its a very unfriendly temple and self-immolation incidents often happen here, I took a photo in the doorway, but didn't dare go in, and left quickly.
阿坝格尔登寺庙，据说是达纳的根据地，一个很不友善的寺庙，常发生自焚时间，在门口拍了点照，没敢进入，匆匆离开 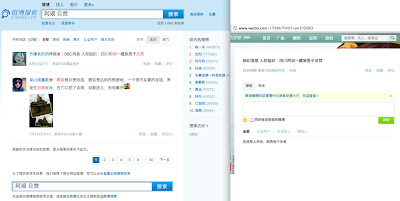 Although searches are not being censored, posts are being disappeared. These screenshots were taken early in the morning on August 15. The left-hand screenshot shows Sina Weibo returns two search results for "Aba Self-Immolate" (阿坝 自焚): One from 1:00 am on August 15 and the one from July 14 translated above (I'm not sure why the time stamp has changed to July 15).The August 6 post shown above has been deleted. 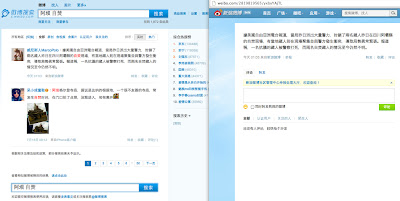 According to an American Radio Free Asia report, yesterday authorities dispatched a large police force, and sealed up the scene where two Tibetans self-immolated the previous day in Aba, Sichuan. Tibetans there had assembled at the scene and clashed with police, leading to an unusually tense situation. The report said one Tibetan protester was beaten to death by police, and the status of the two Tibetans who self-immolated remained unclear.
據美國自由亞洲電台報道，當局昨日派出大量警力，封鎖了兩名藏人昨日在四川阿壩縣的自焚現場，有當地藏人則在現場聚集並與警方發生衝突，導致局勢異常緊張。報道稱，一名抗議的藏人被警察打死，而兩名自焚藏人的情況至今仍然不明。

These screenshots were taken in the afternoon on August 15. The left-hand screenshot shows Sina Weibo returns two search results for "Aba Self-Immolate" (阿坝 自焚): One from 11:00 am on August 15 and the one from July 14 translated above. The 1:00 am post shown above has been deleted. 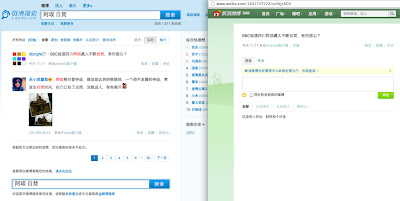 This last screenshot was taken late in the evening on August 15, and shows that the 11:00 am post has been deleted.