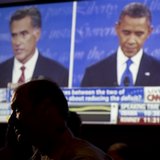 They made some flat-out flubs, too. The rise in health insurance premiums has not been the slowest in 50 years, as Obama stated. Far from it. And there are not 23 million unemployed, as Romney asserted.

Here's a look at some of their claims and how they stack up with the facts:

THE FACTS: In promising $4 trillion, Obama is already banking more than $2 trillion from legislation enacted along with Republicans last year that cut agency operating budgets and capped them for 10 years. He also claims more than $800 billion in war savings that would occur anyway. And he uses creative bookkeeping to hide spending on Medicare reimbursements to doctors. Take those "cuts" away and Obama's $2.50/$1 ratio of spending cuts to tax increases shifts significantly more in the direction of tax increases.

Obama's February budget offered proposals that would cut deficits over the coming decade by $2 trillion instead of $4 trillion. Of that deficit reduction, tax increases accounted for $1.6 trillion. He promises relatively small spending cuts of $597 billion from big federal benefit programs like Medicare and Medicaid. He also proposed higher spending on infrastructure projects.

ROMNEY: Obama's health care plan "puts in place an unelected board that's going to tell people ultimately what kind of treatments they can have. I don't like that idea."

THE FACTS: Romney is referring to the Independent Payment Advisory Board, a panel of experts that would have the power to force Medicare cuts if costs rise beyond certain levels and Congress fails to act. But Obama's health care law explicitly prohibits the board from rationing care, shifting costs to retirees, restricting benefits or raising the Medicare eligibility age. So the board doesn't have the power to dictate to doctors what treatments they can prescribe.

Romney seems to be resurrecting the assertion that Obama's law would lead to rationing, made famous by former Alaska Gov. Sarah Palin's widely debunked allegation that it would create "death panels."

The board has yet to be named, and its members would ultimately have to be confirmed by the Senate. Health care inflation has been modest in the last few years, so cuts would be unlikely for most of the rest of this decade.

OBAMA: "Over the last two years, health care premiums have gone up — it's true — but they've gone up slower than any time in the last 50 years. So we're already beginning to see progress. In the meantime, folks out there with insurance, you're already getting a rebate."

THE FACTS: Not so, concerning premiums. Obama is mixing overall health care spending, which has been growing at historically low levels, and health insurance premiums, which have continued to rise faster than wages and overall economic growth. Premiums for job-based family coverage have risen by nearly $2,400 since 2009 when Obama took office, according to the nonpartisan Kaiser Family Foundation. In 2011, premiums jumped by 9 percent. This year's 4 percent increase was more manageable, but the price tag for family coverage stands at $15,745, with employees paying more than $4,300 of that.

When it comes to insurance rebates under Obama's health care law, less than 10 percent of people with private health insurance are benefiting.

More than 160 million Americans under 65 have private insurance through their jobs and by buying their own policies. According to the administration, about 13 million people will benefit from rebates. And nearly two-thirds of that number will only be entitled to a share of it, since they are covered under job-based plans where their employer pays most of the premium and will get most of the rebate.

THE FACTS: The number of unemployed is 12.5 million, not 23 million. Romney was also counting 8 million people who are working part time but would like a full-time job and 2.6 million who have stopped looking for work, either because they are discouraged or because they are going back to school or for other reasons.

His claim that half of college graduates can't find work now also was problematic. A Northeastern University analysis for The Associated Press found that a quarter of graduates were probably unemployed and another quarter were underemployed, which means working in jobs that didn't make full use of their skills or experience.

OBAMA: It's important "that we take some of the money that we're saving as we wind down two wars to rebuild America."

THE FACTS: This oft-repeated claim is based on a fiscal fiction. The wars in Iraq and Afghanistan were paid for mostly with borrowed money, so stopping them doesn't create a new pool of available cash that can be used for something else, like rebuilding America. It just slows down the government's borrowing.

ROMNEY: "At the same time, gasoline prices have doubled under the president. Electric rates are up."

THE FACTS: He's right that the average price has doubled, and a little more, since Obama was sworn in. But presidents have almost no influence on gasoline prices, and certainly not in the near term. Gasoline prices are set on financial exchanges around the world and are based on a host of factors, most importantly the price of crude oil used to make gasoline, the amount of finished gasoline ready to be shipped and the capacity of refiners to make enough to meet market demand.

OBAMA: "Gov. Romney's central economic plan calls for a $5 trillion tax cut — on top of the extension of the Bush tax cuts, that's another trillion dollars — and $2 trillion in additional military spending that the military hasn't asked for. That's $8 trillion. How we pay for that, reduce the deficit, and make the investments that we need to make, without dumping those costs onto middle-class Americans, I think is one of the central questions of this campaign."

THE FACTS: Obama's claim that Romney wants to cut taxes by $5 trillion doesn't add up. Presumably, Obama was talking about the effect of Romney's tax plan over 10 years, which is common in Washington. But Obama's math doesn't take into account Romney's entire plan.

Romney proposes to reduce income tax rates by 20 percent and eliminate the estate tax and the alternative minimum tax. The Tax Policy Center, a Washington research group, says that would reduce federal tax revenues by $465 billion in 2015, which would add up to about $5 trillion over 10 years.

However, Romney says he wants to pay for the tax cuts by reducing or eliminating tax credits, deductions and exemptions. The goal is a simpler tax code that raises the same amount of money as the current system but does it in a more efficient manner.

The knock on Romney's plan, which Obama accurately cited, is that Romney has refused to say which tax breaks he would eliminate to pay for the lower rates.

ROMNEY: "What would I cut from spending? Well, first of all, I will eliminate all programs by this test, if they pass it: Is the program so critical it's worth borrowing money from China to pay for it?"

THE FACTS: China continues to be portrayed by Romney and many other Republicans as the poster child for runaway federal deficits. It's true that China is the largest foreign holder of U.S. debt, but it only represents about an 8 percent stake. And China has recently been decreasing its holdings, according to the Treasury Department. Some two-thirds of the $16 trillion national debt is owed to the federal government, with the largest single stake the Federal Reserve, as well as American investors and the Social Security Trust Fund.

OBAMA: "Independent studies looking at this said the only way to meet Gov. Romney's pledge of not ... adding to the deficit is by burdening middle-class families. The average middle-class family with children would pay about $2,000 more."

THE FACTS: That's just one scenario. Obama's claim relies on a study by the Tax Policy Center, a Washington research group. The study, however, is more nuanced than Obama indicated.

The study concludes it would be impossible for Romney to meet all of his stated goals without shifting some of the tax burden from people who make more than $200,000 to people who make less.

In one scenario, the study says, Romney's proposal could result in a $2,000 tax increase for families who make less than $200,000 and have children.

Romney says his plan wouldn't raise taxes on anyone, and his campaign points to several studies by conservative think tanks that dispute the Tax Policy Center's findings. Most of the conservative studies argue that Romney's tax plan would stimulate economic growth, generating additional tax revenue without shifting any of the tax burden to the middle class. Congress, however, doesn't use those kinds of projections when it estimates the effect of tax legislation.

ROMNEY on cutting the deficit: "Obamacare's on my list. ... I'm going to stop the subsidy to PBS. ... I'll make government more efficient."

THE FACTS: Romney has promised to balance the budget in eight years to 10 years, but he hasn't offered a complete plan. Instead, he's promised a set of principles, some of which — like increasing Pentagon spending and restoring more than $700 billion in cuts that Democrats made in Medicare over the coming decade — work against his goal. He also has said he will not consider tax increases.

He pledges to shrink the government to 20 percent of the size of the economy, as opposed to more than 23 percent of gross domestic product now, by the end of his first term. The Romney campaign estimates that would require cuts of $500 billion from the 2016 budget alone. He also has pledged to cut tax rates by 20 percent, paying for them by eliminating tax breaks for the wealthiest and through economic growth.

To fulfill his promise, then, Romney would require cuts to other programs so deep — under one calculation requiring cutting many areas of the domestic budget by one-third within four years — that they could never get through Congress. Cuts to domestic agencies would have to be particularly deep.

But he's offered only a few modest examples of government programs he'd be willing to squeeze, like subsidies to PBS and Amtrak. He does want to repeal Obama's big health care law, but that law is actually forecast to reduce the deficit.

ROMNEY: "Simpson-Bowles, the president should have grabbed that."

OBAMA: "That's what we've done, made some adjustments to it, and we're putting it before Congress right now, a $4 trillion plan."

THE FACTS: At first, the president did largely ignore the recommendations made by his deficit commission headed by Democrat Erskine Bowles and Republican Alan Simpson. He later incorporated some of the proposals, largely the less controversial ones. He did not endorse some of the politically troublesome recommendations, such as trimming popular tax deductions like the one for home mortgage interest.

Posted by Indigenous Peoples Literature at 3:03 AM