Folk music originated with the earliest people who came to the Japanese islands, the Jomun. Music included work songs, lullabies and communal music and dance which is associated with the worship of spirit deities (kami), group dances accompanied by response singing and pantomime dances such as a bird dance which portrays (tries to show) flying birds, and a whale dance which tells of the discovery of a whale carcass on the beach and the subsequent (following, resulting) division of whalemeat among the tribe.

A Brief History of Japanese Music

During the Yayoi Period (c. 300 BC - 300 AD), the later settlers of the islands also had ritual dances. Archeologists have found clay images of dancers and musical instruments. The first historical record of Japan's history is the Kojiki, one of Japan's oldest books. It was put together in 712 AD but tells about much earlier events. It tells of a dance performed by Ame-no-Uzume-no-Mikoto, deity or goddess of divine movement, marriage and meditation.

Some of these dance styles may be seen today in the oldest styles of Shinto ritual dance accompanied by drums, flutes and chanting, and the masked shamanistic performance associated with Shinto festivals, and the performances of shrine priestesses. 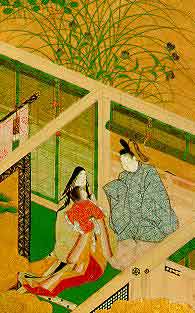 Ancient court music from China and Korea. It is the oldest type of Japanese, traditional music.

Music played with the instrument Biwa, a kind of guitar with four strings.

Music played during No performances. It basically consists of a chorus, the Hayashi flute, the Tsuzumi drum, and other instruments.

Music played with the instrument Koto. Later also accompanied by Shamisen and Shakuhachi. The Koto is a zither with 13 strings.

Music played with the instrument Shakuhachi, a about 55 cm long flute. The name of the flute is its length expressed in the old Japanese length units.

Music played with the instrument Shamisen, a kind of guitar with only three strings. Kabuki and Bunraku performances are accompanied by the shamisen.

Japanese music, the highly eclectic musical culture of the Japanese islands. Over the years, Japan hasborrowed musical instruments, scales, and styles from many neighboring areas.

The indigenous music present before A.D. 453 consisted of chanted poems (reyei and imayo), traditional war and social songs (kume-uta and saibara), and the kagura, solemn Shinto temple music. All were recitations on a few notes. The importation of foreign music, particularly from China, began in the 5th cent. and continued into the 12th cent. The ancient ceremonial music imported from China, which the Japanese called gagaku, no longer exists in China but has been preserved almost intact since the 5th cent. by a continuing tradition of performance in the imperial court of Japan. It is orchestral music using the sho (a mouth organ, the Chinese sheng), the shakuhachi (a long flute), and the hichiriki (a small oboe).

The cantillations of the Buddhist religion came to Japan by way of Korea in the 6th cent. and were followed in the 7th cent. by the bugaku, a ceremonial dance with music that is of Indian origin. In the 9th and 10th cent. many instruments, including the biwa (a four-stringed bass lute used for accompaniment) and the koto (a long zither with 13 silk strings, used both as a solo instrument and in ensemble), were introduced from China.

Midway between sacred and secular is the music of the No drama, dating from the 14th cent. (see Asian drama). It is restrained vocal recitative, utai, using very small intervals, Asian ornamentation (e.g., sliding, tremolo, vibrato), and accompaniment by flute and drums. Popular secular music in Japan began in the 16th cent. with the introduction from China of the samisen, a three-stringed, plucked instrument resembling a guitar, used for accompanying songs. Later, secular music also included operalike creations and many varieties of kumi (chamber music for ensemble, voice, and koto) and koto solo (often sets of melodic variations on a short theme, or damono). Hogaku is the name for folk and popular music heard at open-air festivals.

The Japanese use two basic types of scale, both pentatonic. The first, used in sacred music and common to all of East Asia, has two modes—ryo, the male mode, and ritsu, the female mode. The more frequently used scale, found also in Indonesia and S India, emphasizes semitones and exists in three modes, all used freely within the same composition—hirajoshi, the most important, roughly represented on the piano by the series ABCEFA; kumoijoshi, second in importance, approximated by EFABCE; and iwato, approximated by BCEFAB.

Japanese music is of uneven phrase length, and the fourth is a particularly important interval. Ornamentation depends on the type and purpose of the piece. The rhythm is almost invariably in duple meter, with ternary or irregular passages occurring rarely. However, the independent drum rhythms, when these are present, tend to obscure the basic beat to Western ears. The music is primarily monophonic, although heterophony occurs in orchestral music and in pieces for voice and koto.

The Meiji restoration saw the importation of Western music to Japan, beginning with the brass band. In the 1880s, Western music was introduced into the schools, and in 1887 the Academy of Music was established in Tokyo. Later, symphony orchestras were formed, and Western music became an integral part of the cultural life of Japan. Notable contemporary Japanese composers include Yasushi Akutagawa, Kan Ishii, and Akira Miyoshi. Seiji Ozawa, a conductor of international reputation, was born in Japan.

Posted by Indigenous Peoples Literature at 5:55 AM