When Brazilian indigenous leader Tashka Yawanawa saw the news on television that communities from Peru were campaigning to prevent the construction of dams close to their land, he had no doubt about how he could help.

He turned on his computer, and using Skype, he contacted indigenous movements involved in the protest to offer both his support and to publicise the cause in Brazil.

"We have to update ourselves, and prepare to face this new world." He belongs to the Yawanawa people, who live in the Brazilian Amazon, an area where indigenous communities have also fought many battles against hydroelectric dams. 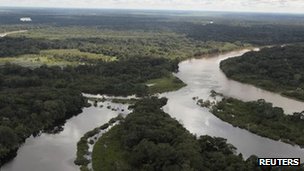 Indigenous land is often rich in resources or lies on a strategic route He leads an organization that seeks to build links with similar movements in other Latin American countries so they can learn from each other's campaigns.

His initiative reflects an unprecedented effort among the region's indigenous groups, as they join forces to resist major projects which they see as damaging to their territories.

It is part of a growing conflict as governments, seeking what they say is badly needed economic growth, build roads and hydro-electric dams, and exploit natural resources such as oil, copper and gold.

At the same time, indigenous groups say they are fighting to ensure that their traditional way of life is preserved.

Skype is one tool they are using to co-ordinate campaigns, alongside more traditional tactics such as adopting a unified position in international organisations including the UN and the Organisation of American States (OAS).

"We are mapping all the achievements of our fellow indigenous peoples in the continent in order to use their experiences here in Brazil," says Marcos Apurina from the Co-ordination of Indigenous Organisations of the Brazilian Amazon (Coiab).

"Our problems are almost identical to the native peoples of other countries."

This approach has been led by large national indigenous organisations and regional movements such as the Co-ordination of Indigenous Organisations of the Amazon Basin Coica operates across national boundaries, helping groups in Ecuador, Bolivia, Brazil, Colombia, Guyana, French Guiana, Peru, Suriname and Venezuela.

Coica's work also involves organising meetings and workshops to help indigenous communities learn about international conventions, and also tips on lobbying and dealing with people in positions of power.

These gatherings allow indigenous leaders to discuss ways of putting pressure on governments to demarcate their territories.

They also discuss how international bodies can help guarantee indigenous rights or prevent major economic projects from having a detrimental impact.

"We are concerned about the new form of development known as the 'green economy'. We understand this as an effort to exploit natural resources in indigenous territories," says Rodrigo de la Cruz from Coica.

Several projects in the Brazil-Peru border region aim to expand the economic and transport integration between the two countries in the coming years.

The Inter-Oceanic Highway, connecting the north-west of Brazil to Peruvian ports on the Pacific coast, was inaugurated in 2011. According to indigenous movements, this has brought several problems to the region, such as deforestation and illegal mining. Jaime Corisepa, president of the Native Federation of Madre de Dios River and Tributaries (Fenamad), says that conditions may worsen if other projects go ahead. One is the planned construction of six hydro-electric dams in Peru to supply the Brazilian market. 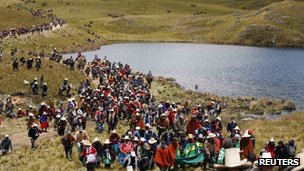 Mining has been the focus of protests in several countries Protests forced the Peruvian government to suspend this project and to start a process of local consultation.

Using new technology and holding regional summits are ways to co-ordinate protests, but indigenous campaigners are also building on relationships that existed long before national boundaries and laws were established.

Marcela Vecchione, from the Pro-Indian Commission (CPI) in the Brazilian state of Acre, in Brazil, says that in many areas, indigenous communities are divided by artificial boundaries.

That is the case of the Manchineri people, divided by a border in 1904 when Brazil annexed the state of Acre.

"I often visit my family on the other side of the border. For me, travelling from Peru to Brazil means only crossing a river," says Geraldo Manchineri.

But thanks to technology, communication across much longer distances has become easier.

Indigenous leaders hope to take advantage of this new way of co-ordinating and gather 1,200 people in Rio de Janeiro this June when world leaders will come together for the Rio+20 meeting.