UN to investigate plight of US Native Americans for first time ! 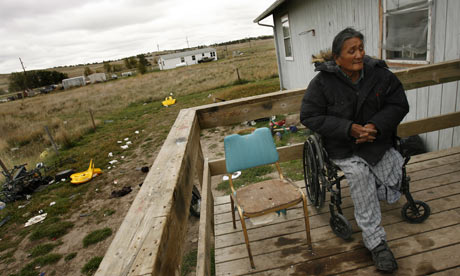 The UN is to conduct an investigation into the plight of US Native Americans, the first such mission in its history.

The human rights inquiry led by James Anaya, the UN special rapporteur on indigenous peoples, is scheduled to begin on Monday.

Many of the country's estimated 2.7 million Native Americans live in federally recognised tribal areas which are plagued with unemployment, alcoholism, high suicide rates, incest and other social problems.

The UN mission is potentially contentious, with some US conservatives likely to object to international interference in domestic matters. Since being appointed as rapporteur in 2008, Anaya has focused on natives of Central and South America.

A UN statement said: "This will be the first mission to the US by an independent expert designated by the UN human rights council to report on the rights of the indigenous peoples."

Anaya, a University of Arizona professor of human rights, said: "I will examine the situation of the American Indian/Native American, Alaska Native and Hawaiian peoples against the background of the United States' endorsement of the UN declaration on the rights of indigenous peoples."

The US signed up in 2010 to the declaration, which establishes minimum basic rights for indigenous people globally.

Anaya said: "My visit aims at assessing how the standards of the declaration are reflected in US law and policy, and identifying needed reforms and good practices."

Apart from social issues, US Native Americans are involved in near continuous disputes over sovereignty and land rights. Although they were given power over large areas, most of it in the west, their rights are repeatedly challenged by state governments.

Most Americans have little contact with those living in the 500-plus tribal areas, except as tourists on trips to casinos allowed on land outside federal jurisdiction or to view spectacular landscapes.

Anaya is originally from New Mexico and is well versed in Native American issues.

He will visit Washington DC, Arizona, Alaska, Oregon, Oklahoma and South Dakota, and will conclude his trip with a press conference on 4 May. He will present his findings to the next session of the UN human rights council.

Anaya's past record shows a deep sympathy with Native Americans' plight. In one development dispute, he told the council that the desecration of sacred sites was an urgent human rights issue.

The Tucson Sentinel reported in 2011 that he had testified to Congress on the need for the US to pass legislation that abides by the declaration.

Also in 2011, he wrote to the Canadian government requesting information about the poor living conditions of aboriginal groups in the country.

Posted by Indigenous Peoples Literature at 10:08 AM